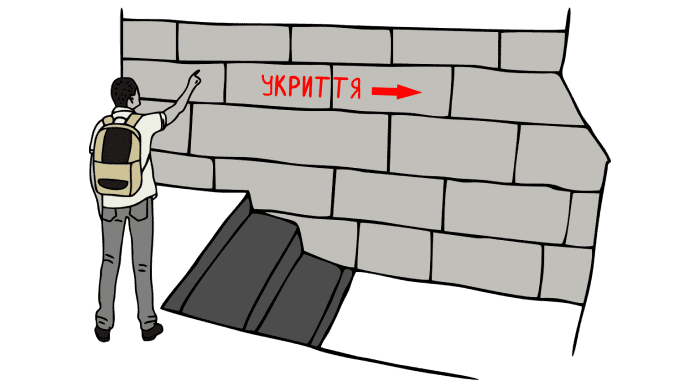 The simplest shelters are basements and semi-basements, underground parking lots, and underpasses. They can hide during short shelling. The safest of them are those with several exits (one of them outside the house).

Such premises are usually used as shops, gyms, warehouses, etc. Owners need to be aware of emergency appointments and be prepared to give people access if necessary. We recommend that you arrange contact with the owners in advance (get phone numbers). Residents of cities with subways can also hide on station platforms or underpasses.

Please note that the subway will primarily operate as public transport to get people to a safe place in the event of an emergency. Therefore, if you go to the station, do not expect to stay there: you may be transported to another place.

The shelter is a sealed structure for an extended stay of people in case of emergency.

To find such premises look for “Shelter” or “Civil Protection Object” signs. There must also be a telephone number of the person who will open the shelter door in case of danger. If not, contact your local authority for information.

To prepare, we recommend:

The subway as a shelter

In wartime, underground metro stations of Kyiv, Kharkiv, Dnipro, as well as underground high-speed tram stations in Kryvyi Rih serve as shelters. You can get into the underground shelter 24 hours a day. In particular, during the curfew.

In Kyiv, during an air raid siren, entry is free — only through manually controlled turnstiles. To enter the lobby during curfew hours, call the police officer on duty. To do this, call the number located at the entrance to the subway or press the bell in the lobby near the subway entrance. The law enforcement officers will organize a passage to the shelter.

In Kharkiv, Dnipro and Kryvyi Rih, the stations are open 24 hours a day. In Dnipro metro, rooms for service personnel are being opened for mothers with children. It’s warmer there than on the station platforms, and there are showers. To get there, ask a subway employee.

Important! Documents can be checked in shelters at metro stations, so it is essential to have your ID with you.

Do not leave the vault until the air raid siren is stopped.

What to do when you hear sirens

The “Attention to all” signal is a long siren sound or intermittent beeps. The beeps of factories and enterprises give the signal through loudspeakers on the streets and the beeps of vehicles (in particular, from SES vehicles equipped with loudspeakers). 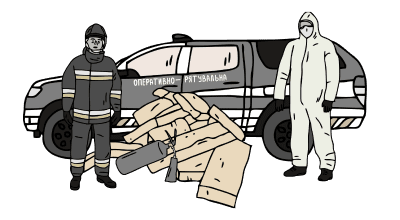 Air raid siren in an educational institution: how parents, students and teachers are to act

Both the parents and the educational institution, when the child is in it, are responsible for the life and health of the child. According to the information of the educational ombudsman, in Ukraine during air raid sirens there are cases when, guided by the desire to protect the schoolchild, parents, on the contrary, can expose the child to danger. In particular, they try to take them from school during an air raid siren.

In addition, there are cases when the directorate of an educational institution puts the lives of employees at risk: for example, calls them to work during an air raid siren.

To avoid such situations and stay safe during an air raid siren, follow these tips.

Important!
If a child is in the shelter of an educational institution during an air raid siren, parents can only pick them up after the signal “Repulse of an air raid siren” has been received. Teachers do not have the right to hand over the child to the parents earlier.

How should employees of an educational institution act during an air raid siren at a school: the algorithm of the State Emergency Service of Ukraine

How schools should prepare for air raid sirens

UNICEF and Kyiv Department of Education and Science provide the following advice on preparing for the threat of an air raid siren:

For employees of educational institutions, we offer a song to reduce the level of anxiety during sirens. Teach children these movements, which are used by experts in working with psychotrauma. We recommend singing the song while going to a shelter or a safe place and, if possible, repeating the suggested movements.

Rules of stay in the shelter

Before going to the shelter, shut off gas, electricity, and water at home, close windows and vents.

If you can’t leave the room on your own, tell your neighbors about it.

You can’t take to the shelter:

Persons with children are placed in separate compartments.

People with ill health are placed in a medical room or near enclosing structures and closer to ventilation. Therefore, it is essential to equip a separate room for the toilet.

It is forbidden to smoke, make noise, light candles in the building without permission. Therefore, it is necessary to adhere to discipline and move as little as possible.

While in the shelter, watch the announcements on the radio, do not leave the shelter until the message that it is safe to go. You can leave the room earlier only if the shelter is damaged.