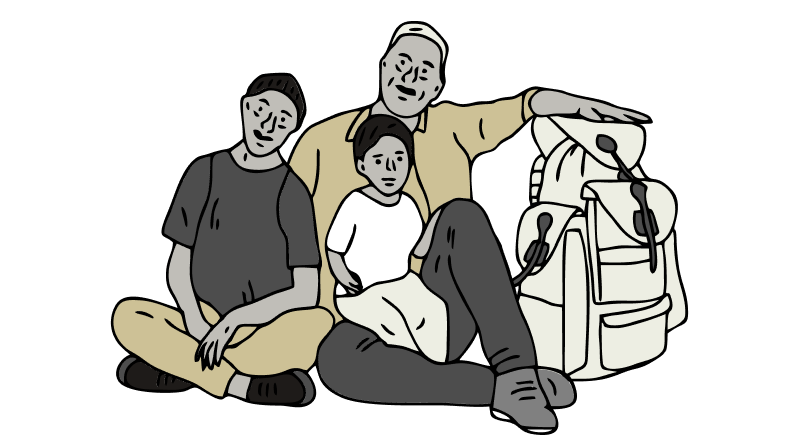 The Armed Forces of Ukraine continue to liberate Ukrainian territory from the occupiers on a daily basis. However, civilian Ukrainians remain in the temporarily occupied territories, and they are facing the risk of forced evacuation to russia.

If it’s possible, avoid evacuation to russia. But remember that your life is the greatest value, so act according to the situation. And though it’s hard to guarantee the safety and observance of rights by the russian military and government officials, you can take certain measures to protect yourself and your loved ones and leave hostile territory as soon as possible.

What can you expect in russia

Ukrainian activists report that when entering russia Ukrainians have their gadgets checked, as well as they are being fingerprinted, searched and may even be interrogated. There are risks of instituting fabricated cases, for example, on extremism. Therefore, everything possible should be done to avoid suspicion and accusation.

Legislative requirements for entry and exit from russia

Remember that from a legal point of view, nobody can force you to stay in russia or impose russian citizenship on you. According to an Agreement between the government of the russian federation and the government of Ukraine about visa-free travels for russian and Ukrainian citizens in 1997, Ukrainian citizens may enter and leave and move around the territory of the russian federation without visas with documents which identify the person and prove citizenship (ukrainian passport, foreign passport).

In accordance with article 3 of the Agreement, the russian federation undertakes to allow citizens of Ukraine to third countries through checkpoints at the state border, open to international passenger services, on the basis of documents valid for traveling abroad (foreign passport). And this means that you can quickly leave the territory of the occupying-country.

How to prepare your gadgets

The contents of your phone, tablet, laptop – is your personal information. According to the law you’re not obliged to give access to it, but you can’t expect the occupiers to comply with international and local law. That’s why you should take care of preparing your gadgets in advance.

Remove any suspicious information from your phone as soon as possible: leave chats and news channels, delete all discussions of political issues, combat actions, condemnation of putin’s and russia’s policies, as well as photos of photos of military hardware, destruction, screenshots, etc. But don’t delete all messengers so as not to provoke suspicion – leave at least one, the least active but even in it clear those chats which can provoke superfluous questions.

Also clear browser history and tabs. But leave something neutral because an overly “clean” phone can also arouse suspicion.

Set up two-factor authentication in all accounts.

In your phone turn off the ability to unlock with fingerprint and FaceID. Avoid unlocking your own phone, don’t enter passwords on laptops and other devices, because you can be watched. Don’t enter the password on the phone, especially under the cameras or in the presence of representatives of the aggressor country.

If you’re forced to hand over your personal belongings during the forced evacuation, give away your phone and gadgets in switched off mode.

How to act during the interrogation

During the forced evacuation there is a risk of getting into the filtration camp on the territory of LDNR. In such a case, the interrogation can be arranged after which you will be given (or not given) consent on further movements.

Try to keep calm during the interrogation. Act as neutral as possible, don’t get provoked, don’t discuss political views and don’t engage in long conversations. Remember, that the russian government cultivates hatred towards Ukrainians, so don’t give unnecessary reasons for detention.

Don’t agree to sign any documents or protocols without reading them attentively. Even if you’re being promised that this “means nothing”, “you need to sign now to pass faster”, etc.

But don’t try to appeal to the law if you feel the threat of physical violence: your life and the life of your close ones has to be your greatest priority. Choose the best behavioral strategy from the point of surviving.

Which legal rights you have

Even during the forced evacuation, you still have certain rights. Thereby, you have a right to inform your close relative about your detention. Demand that you be given this opportunity. Try to reach the volunteers and give the information about your location to as many people as possible.

In case of a criminal case against you, you have a right for a lawyer, and therefore you must be provided with a public defender. At once write down his surname, name and father’s name on a separate piece of paper, and give him contacts of your close ones and ask to inform them.

How to undergo registration and handle with documents

On the russian border, you must draw up a migration card. It will be needed for further leave to the third country.

Importantly! Don’t issue any legal status in russia, it will only complicate your stay in the territory of the aggressor. You’re not obliged to apply for the temporary shelter or ask for a temporary residence permit in russia. Also you’re not obliged to register refugee status – it doesn’t provide any benefits, but you will be forced to give away your passport and other documents.

If you plan to leave the territory of Russia during 90 days, don’t apply for temporary shelter, because for this you will also have to hand over your passport.

Try to avoid any manipulations with your passport: stamps, marks, etc.

Carefully keep your legally received Ukrainian documents and, if possible, don’t even inform the representatives of the occupying country about their existence, if there is a risk of their seizure.

If you have a valid foreign passport, don’t forget to take it with you: with the Ukrainian passport you will be able to leave russia for not all countries, some let people in only if they have a foreign passport. Apart from that, without foreign passport ,you may not be released from the country by russian border guards, wherever you go.

How to leave russia

At the first opportunity, refuse from traveling to camps for displaced people. Once in russia, try to leave it as soon as possible.

There are no leaving restrictions for Ukrainian citizens from the point of view of the law, so try not to linger in russia and get to, for example, one of the EU countries. From the EU territory, you can travel to any country where you can apply for temporary protection status, which allows you to receive temporary housing, benefits and financial assistance.

In the European Union you can not apply for the status after arrival, but look for a place to stay and a job yourself. Medical and juridical assistance for the citizens of Ukraine is given for free. Your SIM-cards and bank cards are working in the EU (unlike in russia). In addition, it’s not necessary to ask for temporary shelter in the country of entry.

If you have a biometric or old-styled passport, you can easily leave russia for the EU countries directly or through the Republic of Belarus.

If you only have internal documents of Ukraine (internal passport of birth certificate) but don’t have biometric passport, but you entered Russia before February 24, 2022 – there is a high probability that you will not be released from russia to Europe, because your relaxations on border controls for military refugees will not be valid. In this case you can try to leave through Belarus.

You can leave russia by land (Baltic countries: Estonia, Latvia, Finland). You can also (theoretically) buy a plane ticket. In russia, you can also use the railway.

The most convenient route to leave the russian federation is via the Estonian border (Ivangorod-Narva checkpoint). You can reach Saint-Petersburg by train, and from there to Ivangorod – hitchhiking or by electric train (2 hours road, 700r.). From Narva you can easily get to Tallinn (2 hours, free for Ukrainian citizens).

To cross the border at the Ivangorod-Narva checkpoint you need documents of Ukraine (biometric foreign passport/internal passport/birth certificate), and also a migration card.

By the words of activists, the interview on the border may stretch out, border crossing may take from 1,5 to 4 hours. It is best to say that you’re going to relatives. Also, it is obligatory to clean your phone as it was described above.

One more option for leave is by bus. In russia, you can buy a ticket for the Ecolines bus to Riga (Latvia), Tallinn (Estonia) or Vilnius (Lithuania) via the website (as well as on the websites of Baltic Shuttle and Lux Express), by paying with ukrainian card. A bus ticket Moscow – Saint-Petersburg can also be paid at Ecolines website with a ukrainian card. Or these tickets can be bought by your relatives/friends from Europe, paid by european card.

Ticket for russian railway can also be bought by your relatives or friends from Europe at the website. Or you can try to pay with a Ukrainian card.

If you have an old-styled internal passport (“booklet”) the information for the ticket must be written exactly as in the passport in Cyrillic (name, surname, father’s name).

Ukrainian SIM-cards work in russia but roaming is pricey and it’s impossible to replenish your account from russia. Therefore, it’s better to replenish your mobile account as much as possible before leaving Ukraine.

In russia you can buy a russian SIM-card both with biometric and internal passports.

It’s almost impossible to exchange hryvnias for rubles in russia, activists say. The exchange operates in several departments of Sberbank in Rostov, Taganrog, Belgorod, Voronezh, Kursk, Tambov. But not in Moscow and not in Saint-Petersburg. However, in any exchange in russia you can exchange dollars and euros.

Hryvnias and rubles can be exchanged in Tallinn.

Where to appeal in Estonia:

Embassy of Ukraine in Estonia

Information about staying in Estonia (accommodation and household issues)

Where to apply for help:

Organization “helping to leave” helps ukrainians who were taken to Russia by force.

Where to inform about forced deportation of your close ones, if you’re in Ukraine:

Hotline of the Ministry of Foreign Affairs of Ukraine