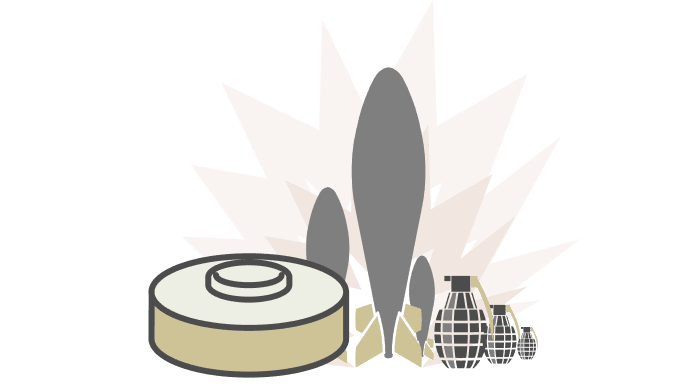 Since the beginning of hostilities in Ukraine, the ordnance technicians of the State Emergency Service of Ukraine have destroyed approximately 12,000 pieces of ammunition, 398 of which were bombs. The threat of mining in the area of hostilities remains significant. We offer a list of recommendations on how to act in areas where there is a risk of stumbling upon mines and other explosive devices.

Mines, explosive devices and unexploded ordnance (these include light weapons ammunition, artillery projectiles, mortar shells, cluster munitions, grenades, fuses, and missiles) may be invisible. If there are hostilities in the territory, or they took place during military aggression, it is necessary to regard it as dangerous and act accordingly. Therefore, the main recommendation for all civilians is to avoid potentially dangerous areas as much as possible.

Mine clearance and disposal, neutralization of improvised explosive devices, as well as unexploded ordnance, should be carried out exclusively by military specialists or emergency services specialists. Until local authorities and/or emergency services report the elimination of the danger, it is dangerous to move around such areas on your own.

If the mines have been properly laid and camouflaged, it will be extremely difficult, if not impossible, to detect the mined area. Therefore, it is important to obtain up-to-date information on mines and explosive devices in your area before starting any activity.

In war conditions, it is not always possible to clearly define the boundaries of dangerous areas, so we suggest observing the following signs:

Places of increased risk of mining:

Mines and explosive devices may be placed in different locations, but there is a list of high-risk locations that should be avoided:

How to reduce the risk of getting into the mined area:

If you are going by foot:

If you are going by car:

If you find yourself in a mined area

If you are moving on foot:

If you are in a car:

When you exit the mined area, make sure you report the threat to emergency services. Do not attempt to mark the mined area yourself!

If someone was injured by a mine

Consider the key actions to be taken if you witnessed a mine and explosive device incident and if a qualified ambulance is available.

The time within which an injured person should be taken to hospital is sometimes referred to as the “golden hour” because, for about 60 minutes, the blood vessels and capillaries around the wound narrow in response to injury, limiting bleeding, and naturally compressing damaged tissues. This allows the rescuers to take the insured person to a place where blood transfusion and proper surgical care are available.

While you’re waiting for help to arrive, follow these steps:

When leaving the territory of the incident, report its coordinates and signs to the authorities and/or by calling emergency numbers. Do not attempt to mark the mined area yourself!